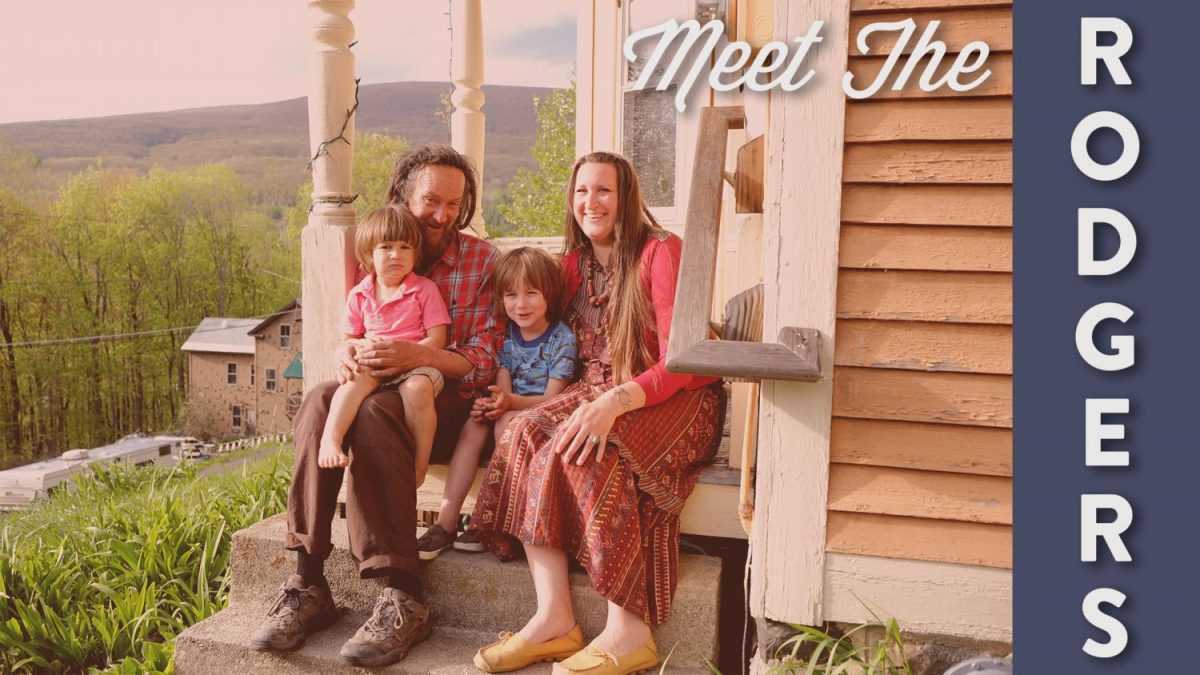 “Meet the Rodgers” is part of a series of interviews about families and people who call Terra Nova home. The church is a family we’d love to invite you to be a part of and we hope this helps you to meet some our family members. Thank you for reading and be sure to follow along with our other stories in the News section of our website.

Nate and Annie Rodgers can’t name a lot of family traditions on the spot, but there’s one they take seriously: Sunday pizza and a beer at Ramunto’s in North Adams, a few doors down from The Green, the Main St. community space in which Terra Nova North Adams meets. Anyone and everyone is invited to join them. If you make it to Ramunto’s on your own a little later and the Rodgers are still there, Judah, their five-year old, may walk up and issue his personal invitation to share their table, not surprising for a family as gregarious and hospitable as the Rodgers.

Nate was born in Florida and grew up near Belle Glade, close to Lake Okeechobee and the heart of the sugarcane region. His grandparents had been church planters, his father grew up a missionary kid in Venezuela, and Nate and his two older brothers grew up in a strict Christian home. “It was a pretty good childhood,” Nate says, adding “we were just wild.” With their friends, the brothers wandered cane fields, daring one another to outswim alligators. (“I’m surprised Nate has his limbs,” laughs Annie.) Amid his rowdier brothers, Nate was quieter, often on his own, “off in my own world,” he says. At age 14, Nate picked up a guitar, a step in his lifelong love for music. [Check out video below for one of Nate’s original songs]

Raised in Holyoke, Annie is the Massachusetts native of the two. She shared a happy childhood with her older brother, though like Nate, she often chose to be on her own as a child: “I lived in my own world for a long time.” She danced ballet and played sports; as a coach, her dad was “extremely competitive… and crazy.”

Annie did well at MCLA in North Adams, where she studied writing and theater. She worked on literary magazines and musicals and learned a bit more of the world. (“I’m surprised I’m still alive with no court records,” Annie admits.) After college, she had a few other jobs and an AmeriCorps year. She returned to the Berkshires to work on a college access project for low-income and first-generation students—Annie, too, was the first in her family to go to college. She later moved on to working as a district aide for State Senator Downing.

Nate spent some years playing in a band and a year living with friends in South Carolina before moving to North Adams. “I was a traveling hippie,” says Nate—a “nomad,” suggests Annie. Friends invited Nate to North Adams to help renovate and run the Elf Parlor (now the Parlor Cafe) on Ashland St., next to MCLA. Nate found a place to stay with the requisite amenities: “an old barn in back, music studio, jam sessions, and a skate ramp upstairs, it was awesome, like a music festival.”

The Elf Parlor not only brought Nate to North Adams but was where Annie and Nate first met four months later., though she had already noticed him skating around town. They have fond memories befriending artists and musicians at the Parlor, which Annie likens to an informal town hall for North Adams.

Nate describes wanting, praying for years for, a family. Remembering the day they met, Nate says: “God told me, ‘Today you’ll meet your wife.’” Annie recalls sitting next to Nate during a sitar recital at a friend’s house. Nate, who grew up on stories of miracle and angels from his relatives, managed to make it three days into dating Annie before telling her: “We’re going to get married. I heard this from God.”

Annie, who had a more mainstream Catholic and later Lutheran upbringing, admits she wasn’t fully ready for this and was unsure of how to take Nate, who describes being “radically re-saved” at age 18. “I had some things to process,” she says. “I’d met my man,” she admits, laughing, before adding, “And then he made me wait a year and a half for a ring, which is a bit of a faux pas.” They were married by his father and uncle at the Woolman Hill retreat near Deerfield. “We’re blessed, we have a ton of friends; everyone in tents like a festival, potluck, grill, like a family reunion,” recalls Nate.

Family and friends are a constant refrain for the Rodgers. Annie mentions how they value and look up to their parents’ marriages when discussing their relationship. Her parents, now in their fourth decade of marriage, are a “model of what marriage should be.” On their two sons: “I listened to [Nate’s] mom a lot about what it was like to raise Rodgers boys.” It’s a rare Rodgers story that doesn’t involve old friends or friends from Terra Nova.

Annie worked for six years with the Northern Berkshire Community Coalition, serving a key role in the eventual creation of the UNO Community Center in North Adams. She remains involved in neighborhood groups and city committees and is still passionate about organizing, believing that everyone is allowed a seat at the table at North Adams. This is also a reason why she likes Terra Nova: “They do a good job of getting out there, including people beyond those we might necessarily see filling seats on Sunday. I love more people with kids, older members … a picture of the community.”

“It was kind of a no-brainer to go to Terra Nova,” recalls Nate, “We walked right in, picked up roles serving: Press buttons, play music—it’s not just playing church.”

Music is also another common thread. On Nate’s punk rock rehearsals: “That’s what Judah was listening to in the womb,” says Annie, to which Nate adds, “she was a trouper.” Their home is full of instruments: guitars, keyboards, a drum kit, and countless other percussion instruments, and their boys are not shy with them. “Bang, bang cymbal! It’s all right, this is how we’re starting,” is how Annie describes mornings. “Music,” says Nate, “is a gift from the Lord. It gives me something to share. The first time I wrote a song for church, the Lord was there.”

These are the stories to which I felt I could to justice. Also the more believable stories. For the more outrageous, hilarious, and touching stories, you’ll have to ask Nate and Annie around a backyard fire or over a slice of pizza.