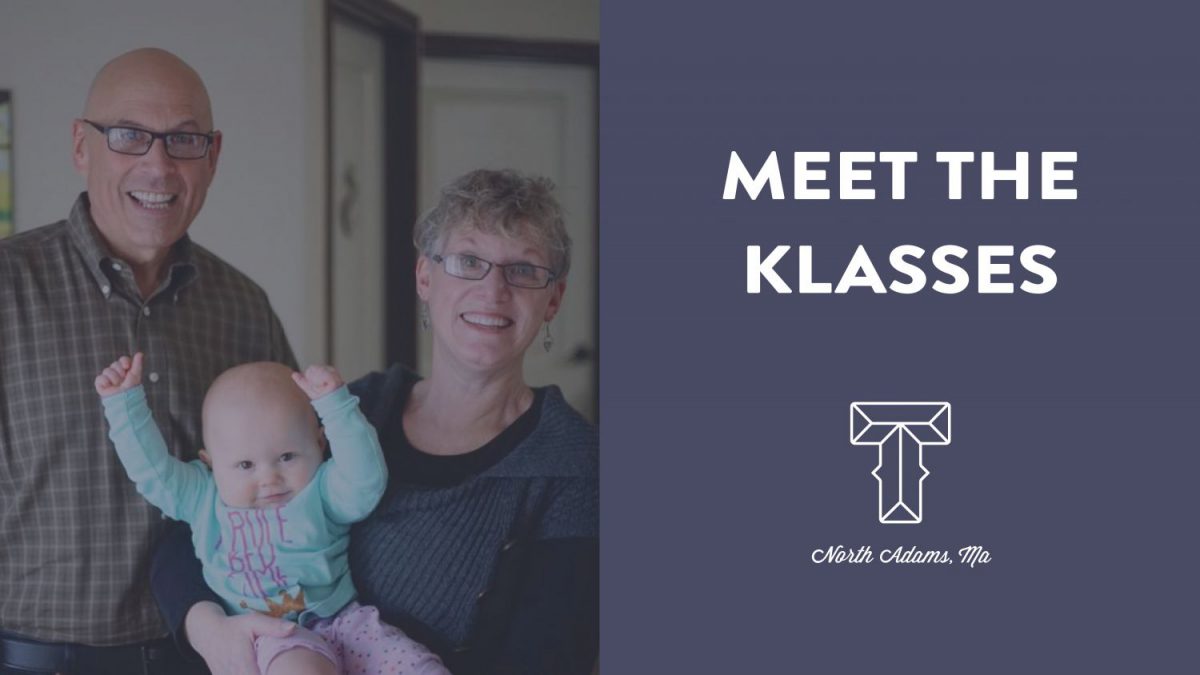 “Meet the Klasses” is part of a series of interviews written by Elizabeth Nasman about families and people who call Terra Nova home. The church is a family we’d love to invite you to be a part of and we hope this helps you to meet some our family members. Thank you for reading and be sure to follow along with our other stories in the News section of our website.

Writing about Steve and Odette Klass has been one of my most challenging projects to date, in a good way. Steve and Odette both have such interesting and vibrant histories, and it would be impossible to honor them fully in such a small space. My suggestion: walk up to one of them, introduce yourself and simply ask them about themselves. What will follow will hold your interest for hours.

Odette grew up in Northern California, and after graduating from college she moved to New York City. She held a degree in theater and was looking to pursue a theater career in New York.

Around the same time, Steve also moved from Upstate New York to New York City and was working as a chef, playing synthesized guitar in various bands and trying to figure out what he wanted to do with his life. Steve and Odette met through a mutual friend in New York, and Steve says that he fell in love with Odette at first sight. While attending a friend’s wedding, Steve asked Odette when ‘she wanted to do this,’ and without hesitation, Odette answered ‘October.’ Steve and Odette did get married that fall, and have been married for 37 years. The couple are parents to three adult children, David and Sam, who live in Berkshire County, and A who lives in Chicago.

Steve started his professional life in the food and beverage industry. He worked as a chef when he first made the move to New York City, and later co-owned and managed a restaurant in New Haven, CT. Eventually, Steve took a job working for a hotel in Upstate New York overseeing food and beverage operations. It was at this job that Steve worked long hours, prompting his then toddler son, Dave, to ask him if he would ever see him. That question changed the course of Steve’s career. He wanted to be home with his family and not miss his three children growing up. Steve took the time to build up his resume, develop his skills and transitioned from the food industry to higher education. Because of the vast amount of skills and talent Steve possessed, the University of Chicago created a position for him and welcomed him home. The Klass’s moved to Chicago and dug deep roots while there. The Klass family even helped to plant a church while living in Chicago. Today, Steve is the Vice President for Campus Life at Williams College, in Williamstown.

Odette acts as the Financial Administrator for the Terra Nova Network. She landed this role by volunteering for it! The Klasses initially attended the Troy, NY location of Terra Nova, and during some staff transitions the church asked for volunteers to help with administrative needs. By her own admission, Odette loves tedious, yet important, work. So she was a natural fit when it came to keeping track of numbers, schedules, and people. For two years she coordinated Tribe gatherings at her home and volunteers for Sunday church at her home as well.

Steve and Odette serve Terra Nova Church in almost more ways that can be counted. When the Berkshire Tribe first launched in late 2014, they quickly offered their home as a meeting place. When Terra North Adams wanted to begin hosting Sunday Services, again, the Klasses willingly opened their home as a place of worship, and Steve was often seen greeting the congregation as Odette role modeled hospitality: welcoming, preparing and offering refreshments, attending to any needs that any member had. For each Sunday service, the Klasses stayed up late Saturday night arranging and re-arranging furniture, cleaning and getting the audio equipment ready as well. The Klasses are special in that they excel in the roles that often go unnoticed – and it is in this service that they feel close to Christ. Steve even spent a season scheduling musicians for the worship bands in North Adams.

Today, Odette is still an unsung hero. She comes in on Saturdays to help clean and set up Sunday Service, getting right into the thick of things by taking on tasks that no one else does, like bathroom cleaning duty! When you see her, please thank her for all the ways she continuously pours into the church.

In the future, Steve and Odette hope to see Terra Nova North Adams remain a safe place for people from all walks of life to come and explore their faith. The Klasses have always viewed Terra Nova as a church that challenges it’s congregation by reminding them of truth. The Klasses are constantly challenged in their faith when they are made to feel uncomfortable by God’s truth, and hope that Terra can provide this way of growth for the rest of Berkshire County as well.

I personally, am thankful for the ways Steve and Odette model self-sacrificing service and I look forward to the day when I can return the favor for them.