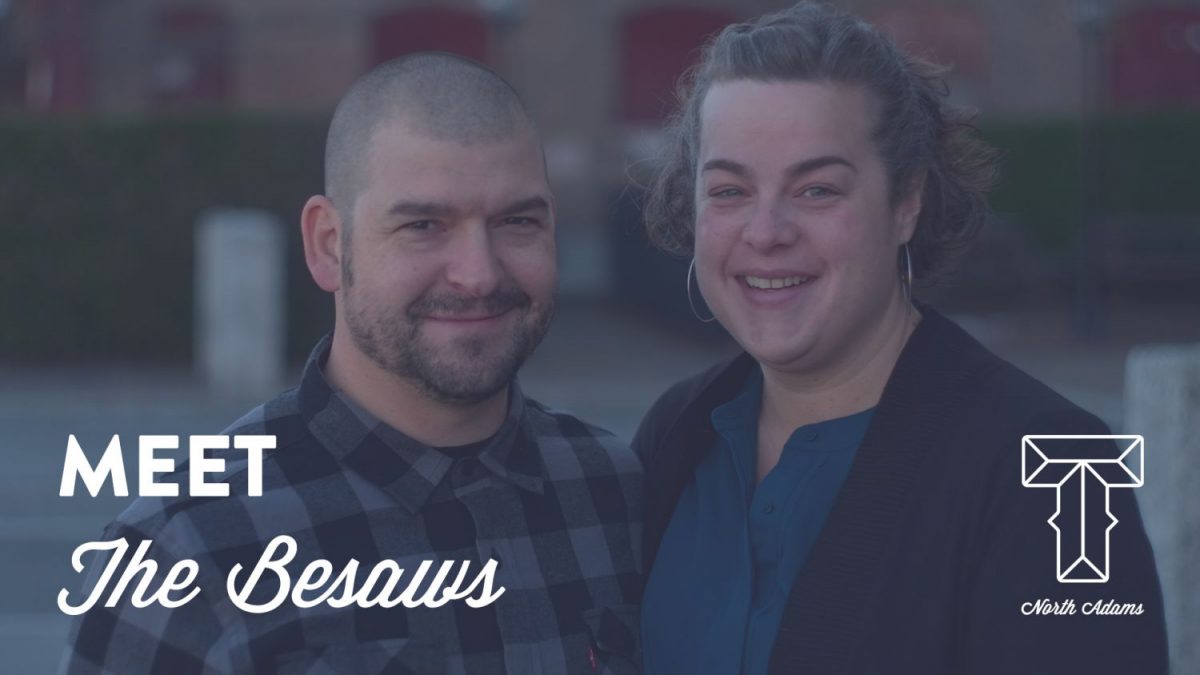 “Meet the Besaws” is part of a series of interviews about families and people who call Terra Nova home. The church is a family we’d love to invite you to be a part of and we hope this helps you to meet some our family members. Thank you for reading and be sure to follow along with our other stories in the News section of our website.

If asked to characterize the Besaws in a single word, I might choose Dynamic. Perhaps Zest or Vim. Such words won’t tell you everything about them, of course, but they are fair descriptors: Amber and Gabe Besaw live on the go, and they have personalities to match.

Gabe and Amber grew up near Belleville in Jefferson County, New York. Larger dairy farms surrounded Amber’s family’s more modest farm: “orchard, garden, playing in dirt, in hay, with animals.” This time also saw the origins of Gabe’s eclectic taste in music: He picked up jazz and rap as a teen, was introduced to DJing on visits to New York, was the self-described “old man” of a punk band for four years in his early twenties, and worked at a record store for eight years. “Getting into a lot of trouble” as a young teenager, Amber claims, is good preparation for raising teenagers now.

The Besaw family’s journey has not been straightforward: “It was never linear,” Gabe told me.

Amber’s older brother and Gabe were kindergarten classmates, but the relationship between Gabe and Amber was not exactly linear either. At a high school dance, Gabe’s date was unwilling to compete in a dance contest. Amber stepped in, and the impromptu pair gave a contest-winning performance. But they weren’t a couple yet: “He wasn’t even my type,” Amber adds with a laugh—though she would later agreed to be Gabe’s prom date. They dated for two years while Amber finished high school.

Amber attended a SUNY school, switching from archaeology and anthropology to sociology and psychology: “Dead people bored me, live people are so much more fascinating.” Thus Amber began on her career in mental health and family services. Amid his parents’ divorce, Gabe would stay with Amber’s family while she finished college. They married in their early twenties, but the illusions and ambitions of young couplehood proved tricky. Before learning the hard way about the importance of sticking to a budget, they had some setbacks, which included living for a year and a half in her grandparents’ basement. Their second son arrived then, amid trying medical complications. “God intended it,” says Amber.

Amber worked in a variety of community mental health settings, including ER social work, before shifting her focus to children and youths. For over six years, she served 140-plus clients. Though they loved their church and community, the Besaws began looking for new opportunities not long after Amber’s parents moved to Nepal to do mission work. “We had a family, but we didn’t have the roots,” explains Gabe.

They visited North Adams on a short trip to Massachusetts. “We’re going to live here,” announced Amber on her first sight of the town; Gabe was also taken with North Adams but for once was the more cautious of the two. “I’m kind of a safety person; Gabe’s the risk-taker. It felt good to take that risk,” says Amber. After finding a job in Massachusetts, Amber couch-surfed, working ten-hour shifts and returning to New York on the weekends, where Gabe worked and took care of their sons, then a toddler and six-month old.

A month later, they made the full move to from New York. “The first nine months were really tough, and we were barely scraping by,” recalls Gabe. He sold appliances, then worked construction, eventually finding his niche as a glazier. After working in North Adams and Pittsfield for several years, Amber began looking for a job friendlier to her family schedule. She joined the Northern Berkshire Community Coalition (nbCC) to help run its family services program. Later, she served as nbCC’s deputy director and is now its Executive Director.

The Besaws would later join Terra Nova North Adams while it was still a house church: “It was God’s planning and God’s timing,” says Amber. Both understand that Christians are at times viewed with suspicion and even distrust, but Gabe and Amber work to show a different sort of everyday Christianity in their lives.

“Keeping up” with the Joneses is proverbially an impossible task, not worth the effort. It would be challenging to keep up with the constantly on-the-go Besaws. Fortunately meeting the Besaws is more doable than keeping up with them—with a little flexibility and persistence. And as I’ve learned, meeting them is very much worth it. You can usually catch up with the Besaws after a Terra Nova service. Some Sundays, you’ll recognize Gabe, nattily dressed but still energetic as he helps lead the service. Or he may be slightly scruffier as he keeps the beat on the djembe.

Meeting up with Amber might entail an early-morning meeting at a coffee shop or perhaps dropping in as she serves the community at nbCC. Or you might find her watching her older son playing soccer or her younger son playing hockey—“I try to never miss a game,” she notes proudly. You might ask to join Amber on her long bike rides, if you think you can keep up.

Gabe’s job as a construction site foreman can require long drives each day on top of long hours onsite, so a chat with him may take place later in the evening, perhaps at their younger son’s hockey practice. The rink is “our home away from home during winter,” Gabe explains. Or you might be able to catch Gabe—aka Rebel Beat Sound System’s DJ Boss Steady—playing Motown, ska, reggae, and more obscure tunes at local community events or the occasional out-of-town gig. After church, you might find Amber volunteering at a local events, helping publicize new nbCC projects like the Bike Collective

.
You may now begin to agree with me on the futility of describing the Besaw in just a few words. But you’ll likely agree that adjectives related to motion aren’t off the mark.