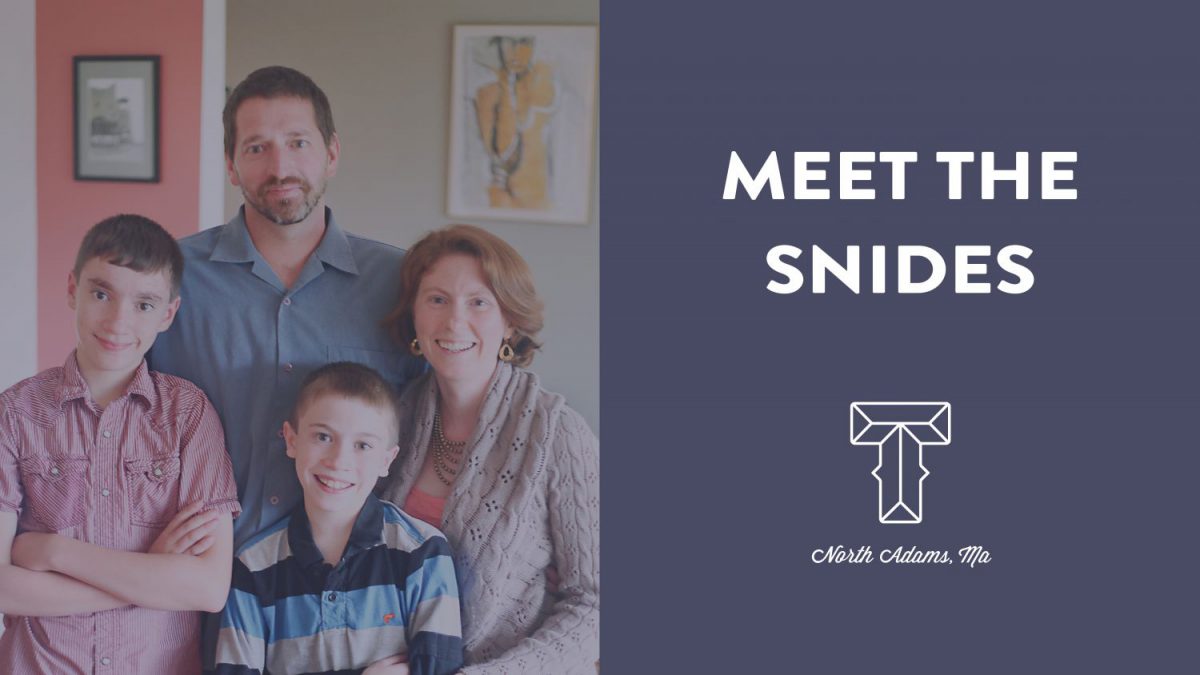 “Meet the Snides” is the second in a series of interviews written by Elizabeth Nasman about families and people who call Terra Nova home. The church is a family and we hope this helps you to meet our family members. Thank you for reading and follow along with our other stories in the News section of our website.

When Carey and I first spoke about meeting up so I could spend some time with the Snide family, she made it so quick and easy. Within minutes, we had decided a Tuesday night would work best, and Tuesday nights are game nights at their home. Andrew and I were already excited to participate in game night, but Carey then extended the invitation to include dinner, and our anticipation only increased. Having spent time in Tribe with Carey, I can say with confidence that she knows her way around a kitchen. Cooking, especially for others, is one of her love languages.

Carey served us up a delicious roasted veggie and chicken casserole, complete with homemade guacamole, four types of hot sauce and piping hot rice. Carey made it possible for us to all customize our dinner. Apparently, the Snides have a love affair with hot sauce; it started with Carey’s father and she is faithfully passing it down to her two sons.

The Snide family has five members, four human and one furry. Paul, 41, is a self employed contractor and works mainly in and around the Bennington, Vermont area, the city they call home. Carey, 34, is an after school director. Paul and Carey have two sons. Joshua is thirteen and David is eleven. The Snides are joined by their dog Sadie who is a terrier-corgi mix. Sadie is about seven years old.

Despite Carey having once said that she would ‘never marry anyone from Pownal, but I’m not sure why,’ Paul and Carey have been happily married for fourteen years. Paul and Carey met in a unique way. They were set up by Carey’s neighbors, and through a series of conspiracies thought out by these same neighbors, they began dating. They had their first official date not far from their current home.

Paul and Carey serve in the communities of Bennington and Terra Nova North Adams. The Snides have been with Terra Nova for seven years. During this time both have served the church. Carey helped with set up and with the offering. Paul used his gifts to help with renovating space in both Troy and Saratoga, shortly after that location planted. In North Adams, Carey heads up the children’s programs and finds immense joy in doing so. Her face lights up when she talks about putting together the program. Paul, a self proclaimed ‘rock god’, can be found playing bass in the worship team. Joshua and David also serve Terra Nova. Joshua has been helping Carey in the kids room and both boys are always willing to help set up and tear down our current meeting place.

Outside of church, Paul and Carey are always interacting with the city of Bennington. They host a study in their home twice a month, to which anyone is welcome to attend. When I asked Paul and Carey what their desire for Bennington was, they both said healing. Paul said that he hoped that the cycles of poverty and drug addiction come to an end, and that the residents of Bennington could move past their pasts. Carey said that she wished to see healing for the Christians in Bennington, so that they might be a light in the darkness and find true freedom in Jesus Christ. Even though they may not see it, Paul, Carey, Joshua and David truly are a piece in the healing process of the city of Bennington.

After dinner, we were joined by two of Paul’s sisters for a game night. Carey pulled out a tray of warm brownies filled with homemade strawberry jam for us to eat as we played. And even though the game got intense, and we all almost lost, it was a ton of fun! Andrew and I felt extremely blessed to see this side of the Snides and look forward to attending another game night soon.

When I re-listened to the recording our of time with the Snide’s one thing stands out above all, the laughter. The Snide’s are a loving and welcoming family who serve their children, their community, and the Lord well. And they have fun doing it.